Home Premier League Chelsea “You can see it on pitch” – Chelsea star heaps praise on...
SHARE

Following Eden Hazard’s magnificent goal against Liverpool in the Carabao Cup, Gazzetta dello Sport decided to sit down with the Belgian to discuss how things were going in London under his new manager.

After a disappointing sophomore season under Antonio Conte, the Blues aren’t featuring in the Champions League, but are instead playing Thursday night football in the Europa League.

The busy calendar meant there was little time to prepare for the West Ham game at the weekend, which showed, as Maurizio Sarri’s side were unable to get the three points, drawing 0-0 instead.

However, their start to the season has been near perfect, and Hazard explained what has changed since the Italian took over from his compatriot in the summer. 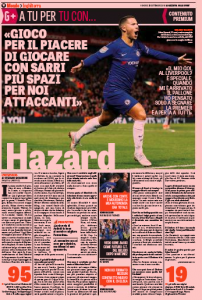 He said: “You can see it on the pitch. We have new players, people who like to have the ball. We have more possession based on passing, and the forwards are reaping the benefits from this new philosophy.

“More possession means a higher possibility of creating chances, to dribble the opponent, to shoot. Sarri is a manager who likes to have the ball and that’s the difference, but he’s Italian, and just like with Conte, training is tough and demanding”.

Despite this new philosophy, Hazard wanted to make it clear that he has as much freedom to do what he wants with Sarri than he did with Conte or José Mourinho.

As for his contract with Chelsea, which is set to expire in 2020, the Belgian once again stated that he has yet to renew anything, and he hadn’t received any news about it either.