Home Premier League “You can hardly refuse it” – Defour happy at Burnley, but makes...
SHARE

Steven Defour hasn’t played for Burnley since his side’s 1-0 defeat in the Premier League to Manchester United in January. The midfielder suffered a knee injury and went under the knife and hasn’t appeared for Sean Dyche’s side since.

The injury also saw him being left out of the Belgium squad for the 2018 World Cup. Defour subsequently announced his retirement from international football as he wants to focus on extending his club career.

His current deal at Burnley will expire at the end of next season, and last month HBVL suggested a two year extension was on the way, but that hasn’t been firmed up yet. The 30-year-old believes he can continue in the Premier League for three to four years.

Defour has also stressed that he has no intentions to leave the English club this summer, if he feels that he can “grow with Burnley”.

“I certainly have a few years in the Premier League in me, three or even four. I think it’s a nice competition that is pretty good for me too. I have an option with Burnley for another year. We’ll see,” Defour told the Belgian newspaper Het Laatste Nieuws.

“Burnley is growing. We are put forward as a relegation candidate every year, but stay in again and again. Our seventh place has provided the necessary respect. If I can grow with Burnley, I do not immediately see a reason to leave.” 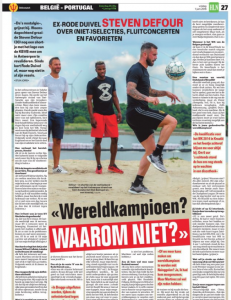 Despite wanting to continue at Burnley, Defour admitted it would be “hard to refuse” if there was a “financially top” bid from China.

When asked if he could refuse a Chinese offer, Defour replied: “Probably not. China, America, the Emirates… These are things that you need to consider at the end of your career. If there is a bid that is financially top, you can hardly refuse it.”