Jurgen Klopp’s men had a harder time on Wednesday evening than they’d have hoped for, but they got through against AS Roma and now await Real Madrid in the Champions League final.

Bild are helping to make the week even better.

The German newspaper are big fans of Klopp, and by extension Liverpool, and they claim the Reds are plotting to sign Christian Pulisic from Borussia Dortmund.

This would be the third attempt Klopp had made for Pulisic, according to Bild, and that shows some determination.

Trying to find out some more, Bild spoke to BVB’s Michael Zorc, who told them: “I’m in constant contact with Jurgen Klopp – but I know nothing about that.”

Bild don’t entirely buy that, saying ‘really?’ and asking if Zorc is just starting a game of transfer poker. 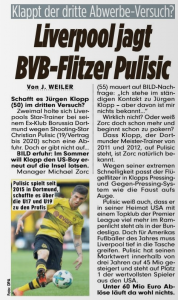 A potential transfer fee to take Pulisic from Dortmund to Liverpool is put at over €60m.

That’s just an estimate of what the player may cost, so when it’s claimed ‘Bild say Liverpool are preparing €60m offer for Pulisic’ that’ll be wrong.

It had been thought there was an agreement from Klopp that he wouldn’t poach Dortmund players, but that isn’t mentioned by Bild today.