Newcastle United’s takeover has given endless opportunities to media around Europe to come up with transfer rumours.

That it’s currently an international break, traditionally a quieter time for the football media, means this chance has been grasped. Combine all that with the rumour hungry Tuttosport, and it results in huge front page claims on Tuesday.

The Italian newspaper, which is based in Turin and concentrates mainly on Juventus and Torino, has five players on the cover, along with an image of Mohammad Bin Salman.

The main text reads ‘Buy them all’.

Inside, the newspaper says Newcastle with use a ‘rain of millions’ to try and tempt star names to sign them. The five men pictured on the front page are Matthijs De Ligt, Marcelo Brozovic, Franck Kessie, Stefan de Vrij and Federico Chiesa.

Aaron Ramsey gets a mention inside, although he’s not considered quite as exciting in terms of what the Magpies want to do. 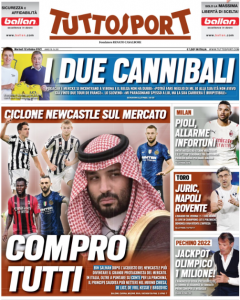 Everything else is based on agents moving behind the scenes, namely Mino Raiola, and there’s no suggestion yet of any contact being made.

Newcastle United fans are probably best advised to keep calm amid this rush of rumours, and then wait for more serious claims arriving in the coming weeks and months.