Having purchased Southampton F.C. in August 2017, Gao Jisheng seemed set to start a long term as the club’s owner, and yet about two years later, the Premier League side were up for sale again.

Struggling to find an investor during the Covid-19 pandemic, the Chinese businessman may have finally found his man in Gérard Lopez, who recently handed over Lille to a Luxembourg based group.

France Football report on Tuesday that the 49-year-old is ‘offering €125m’ to take the club away from Jisheng, which is around half what the current owner paid to acquire the Saints from the Liebherr family in the first place.

It’s stated the main attraction for Lopez is the current value of the squad (around €260m) as well as the fact the club own St Mary’s, their stadium. 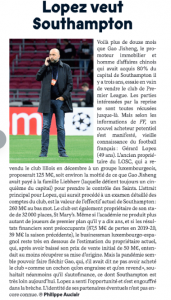 As things stand, the offer is ‘largely below’ what Jisheng had in mind, who would like to ‘at least recoup his original expenditure’.

However, it’s said the Covid-19 pandemic ‘could make him think’, which is why Lopez has made his attempt now.

As for the partners of the former Lille owner in the affair, ‘they aren’t known as of yet’.