From being close to signing for Olympiakos in the summer to convincing Sean Dyche that keeping him at Turf Moor was for the best, what exactly did Steven Defour do?

Well, first of all, he lost weight.

Speaking to Het Belang Van Limburg in Belgium, the former Porto midfielder explains the secret behind his return to form, giving little choice to Roberto Martinez but to call him up to the national team.

However, his performances on the pitch aren’t the only change many have noticed, with his temper also far calmer than it used to be.

The Burnley midfielder also has a good explanation for that. 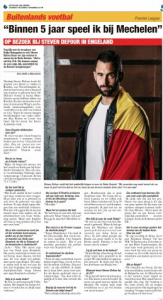 He continued: “I’m better at putting things in perspective since the birth of my daughter. There are worse things than losing a game. It doesn’t stop me from getting angry when the referee gets things wrong, but in England, they talk to you.”

Explaining that his decision to leave Anderlecht for Burnley, other than to play in the Premier League, was to get away from everything that happens around football in Belgium, and while his first year at Turf Moor was tough, things have quietened down a bit now, even if he does miss a few things from his home country.

What exactly? “My friends and the Belgian sun. It always rains in England, and we can’t wear a hat or a neck warmer at training.”

We’re not sure what he’s on about, really, it’s only meant to rain for four out of the next seven days in Burnley.

Time to get the flip flops out, Steven.