Monday’s edition of O Jogo is again confident that Bruno Fernandes to Manchester United should happen this week.

After edging towards despair last week, things started to get a little brighter especially for the morning Portuguese newspapers.

O Jogo now states ‘Bruno prepares an imminent goodbye’, with it feeling like he’s now said goodbye as many times as Lionel Ritchie has said hello.

The Premier League club will pay €55m fixed for the midfielder, with a further €15m in bonus payments. It’s believed that only ‘details’ need to be defined relating to the €15m.

Of course, we’ve been in a similar situation before, and, despite the confidence, if those bonus payments require Bruno to morph into Messi 2.0 and drag United to quick and unlikely success it’s not going to go down well. 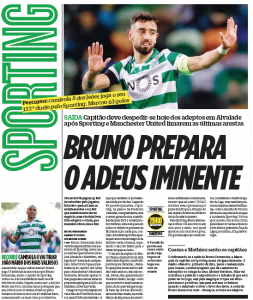 Sporting president Frederico Varandas wants the bonus levels to be realistic, yet O Jogo believe it’s just a case of ‘smoothing small edges’ and that the transfer is ‘imminent’.

A Bola report Manchester United have reached €55m, with Sporting looking for a headline figure of €70m.

Interestingly, neither of the two Portuguese newspapers mentioned above are today carrying the €60m minimum claim.

It had been reported repeatedly that Varandas was looking for a fixed payment of €60m, with bonuses on top of that, and that it’s now not mentioned may well suggest Sporting are willing to compromise.

Regardless of that, despite claims of the transfer being imminent, it doesn’t feel so, and there’d need to be very quick progress for Bruno Fernandes not to play against Maritimo on Monday evening.

Meanwhile, RTP, a reliable public service broadcaster, reported on Sunday that the offer had been increased to €55m plus €15m in bonuses, agreeing with other Portuguese claims.