Manchester United took their time signing Bruno Fernandes, securing the Portugal international at the end of the January 2020 window despite registering their interest a year earlier.

Sporting got the level of deal they wanted in the end, and the midfielder has gone on to be a huge success for the Old Trafford club, becoming an instant hero and key man for Ole Gunnar Solskjaer.

The Lisbon club are happy in hindsight with how the whole thing went. There had been a plan to sell Fernandes the previous summer, however, they got to keep him for a few more months and still received the big chunk of money they were looking for.

Record report that’s something they plan to do with Nuno Mendes, and Manchester United are said to be in the picture to sign the young fullback.

A Mendes exit was on the cards for this summer, but no clubs have come forward with offers close to the €70m that Sporting want, despite interest from United, Manchester 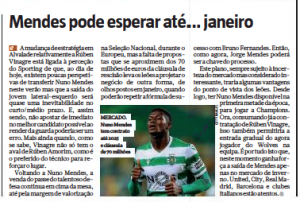 City, Real Madrid and others.

Therefore, Sporting hope to keep him until January and repeat the ‘Bruno Fernandes formula’.