Tuesday’s edition of A Bola has a front page shouting: ‘Andreas Pereira in Bruno negotiations’

They also state: ‘The Brazil international of Manchester United can reach Sporting on loan’

A Bola once again reports there’s general agreement on a deal worth €70m for Bruno Fernandes to move to Old Trafford this month.

Sounding incredibly chilled out, indeed far more so than many United supporters, the Portuguese newspaper says the transfer is now ‘advancing at cruising speed’.

The overall €70m figure was agreed after just ‘a few hours’ on Friday, and now ‘the lions are slowing down the conclusion of the deal as they continue to examine the various possibilities placed on the table by the English for possible loans’.

Manchester United are said to have offered the choice of four players, and Sporting are taking their time ‘in what may be a strategy of Sporting’s leaders to delay the deal and, thus, they can still count on the team captain in the difficult and important game of Friday, at the José Alvaiade Stadium, with eternal rival Benfica’.

Andreas is the name gaining most consensus, whilst Joel isn’t that attractive as Sporting have their own prospect in Luis Maximiano. Rojo’s salary is too high, and Gomes isn’t 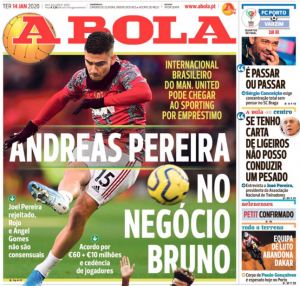 thought to have the experience required.

The conditions of loans, salaries, and associated costs would need to be solved, and it always becomes more complicated when other agents are brought into the scenario.

Should Manchester United want this signing settled quickly then they may be best advised to take the loan option away, or at least make it separate.

Bruno playing against Benfica is a risk. It’s a high stakes match, full throttle, and he’s the major danger for Sporting, so it would be no surprise if he’s on the end of a few tough tackles.

It may be the fairytale ending for his time at Sporting, but it could also turn into a complete nightmare.