It’s now starting to look like Benfica did the right thing when turning down Brighton & Hove Albion’s attempt for the signing of striker Darwin Nunez in the summer.

The Uruguay international has four goals in four league games this season, and it’s no wonder why he’s highlighted by several outlets from the Portuguese media.

Newspaper Record features a story saying the striker has become ‘deadly’ this season, with all stats showing why he has an exciting future ahead.

Darwin Nunez went through a knee surgery back in May, and Benfica still trusted him. A big proof of this is said to be their rejection to the Seagulls’ approach. 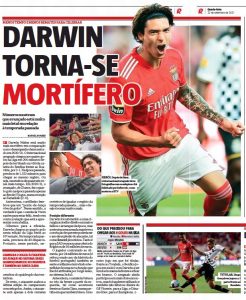 Record recalls that Brighton offered €30m for the transfer, and since the Eagles believed this would be the year for Nunez’s ‘explosion’, they turned it down.

The striker is protected by a release clause worth €150m, which means that in case he continues doing that well this season, Benfica will have a huge margin of negotiation next summer, which won’t please Graham Potter and co. in the slightest.