Bought by Manchester City in 2017, Ivan Ilic enjoyed a series of loans until 2021, when Hellas Verona bought him for £6.75m.

It was a nice little profit for the Premier League champions, but he could soon be facing them if Corriere di Verona are to be believed.

That’s because Brighton & Hove Albion are interested in the midfielder, who enjoyed a solid season at the heart of the Serie A club last year.

Scoring two goals and assisting another five, the 21-year-old clearly caught the eye of Graham Potter’s staff, who have made him a ‘target’ for the Seagulls.

In fact, ‘the opportunity to prove himself in the Premier League is tempting for Ilic’, who is ‘also in demand in Serie A’. 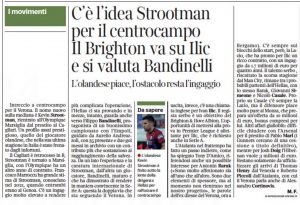 Brighton would certainly give him a good platform to prove himself in England’s top-tier, with Potter always keen to give talent a chance if they’re good enough.

Whether they buy him, however, remains to be seen, and Corriere Verona don’t reveal how much would be needed.

All we can assume is that with a contract until 2026 and being bought for £6.75m last year, they’d want at least double that, which Brighton could certainly afford if they put their mind to it.