Brentford are not alone in the race for SC Braga fullback Francisco Moura.

This is information which is repeated by at least three Portuguese newspapers today, as the local media seem very attentive to is what happening with the 22-year-old this month.

One of the outlets who are reporting it is Jornal de Notícias. They claim the Bees have been making approaches for the signing, and point out there’s indeed a ‘strong’ chance that he’ll leave Braga this month.

They add, however, that other English sides are interested. And the competition, along with the fact that the player is protected with a contract until 2026 and a €30m release clause, are convincing the Arsenalistas to ask for more for his sale. 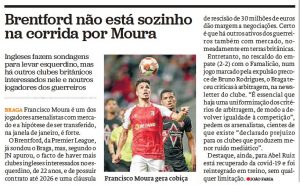 In the other two reports we get to see a response to the claims from England which said Brentford recently offered something close to €30m for the move.

Newspaper Record points out there have been only been ‘informal’ contacts from the Bees, and both them and O Jogo say that other English clubs want the fullback as well.

That definitely sounds like a sign for Brentford to go harder for the signing, as we wait and see who in the Premier League is competing to get Moura.