Nobody knows better than Brendan Rodgers the dangers of training at an away ground ahead of a UEFA match. Many clubs do it, but under Rodgers, Celtic tend to train in Glasgow before flying out to wherever the match is.

That likely dates back to the manager’s time in charge of Liverpool, when his ‘surprise’ team to face Real Madrid was named in several Spanish newspapers on the morning of the match.

Rodgers had given away all his secrets to the Madrid media spies who watched training at the Bernabeu the evening before, and subsequently Real Madrid knew exactly how their opponents would be playing.

After that embarrassing situation, Rodgers has changed his pre-match plans, so now when the Parisian press are naming the teams ahead of PSG v Celtic, it’s based on really nothing more than fans would know about the Glasgow club’s plans.

For the PSG side, there’s of course a much better chance of inside information, and both L’Equipe (pictured above) and Le Parisien (pictured below) believe the full strength trident of Neymar, Edinson Cavani and Kylian Mbappe will be used.

There’s slight French disagreement on how Celtic will line up. 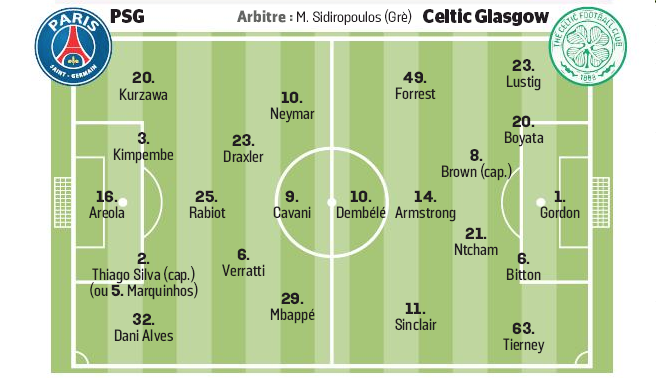