While we sit at home on lockdown during this quarantine, it’s easy for our thoughts to run wild, perhaps even leading to long-distant dreams we wish could happen but know probably never will.

It’s understandable, which is why we’ll forgive Gazzetta dello Sport for suggesting a potential transfer regarding a Manchester City player we feel is a little bit out there, even by Italian enthusiasm standards.

The newspaper look at ways Juventus could fund a move for Paul Pogba, as the Manchester United star remains top of their list for the summer, and their belief is three players could be sold: Miralem Pjanić, Douglas Costa and Federico Bernardeschi.

We’ll be focusing on the Brazilian in this article, as the outlet explain the winger ‘could become an important piece in a trade’ for Gabriel Jesus.

It’s no secret Juventus are keen on the young forward, because Tuttosport have been ramming it down our throat for the past three months, but now we’ve even got Gazzetta jumping on the bandwagon, suggesting the Serie A champions ‘crave’ the Manchester City striker. 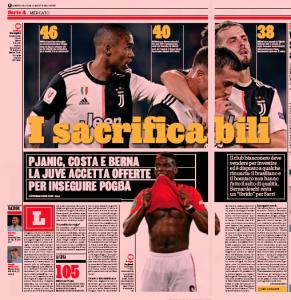 Their thought process is that Douglas Costa was bought by Pep Guardiola during his time at Bayern Munich in 2015, and scored seven goals while assisting another 18 in the 43 appearances he played under the Spaniard in his first season in Germany, so they’d naturally want to work together again, while Juventus are ‘very intrigued’ by Jesus.

Look, we’re not saying this isn’t going to happen, because we all know football is a very strange place where anything is possible, but it seems very unlikely Manchester City would agree to part ways with one of their fan favourites and swap him for an injury prone winger nearing his 30s.

But, again, that’s just us.