Home Championship AFC Bournemouth Bournemouth’s offer for Portuguese midfielder ‘not even close’ to what club are...
SHARE

Portuguese newspaper A Bola brings today some news about Porto youngster Fábio Vieira, who’s getting a place in the first team squad this season.

The 20-year-old is set to have his contract extended, as the Dragons plan to give him a pay raise and change his release clause.

Porto’s intention is also to protect him from the interest of other European sides. A Bola says Bournemouth, Juventus and RB Leipzig are all interested in the midfielder.

It’s claimed that the The Cherries have made an approach in order to know the conditions for the signing, but it doesn’t sound like it was a very productive conversation. 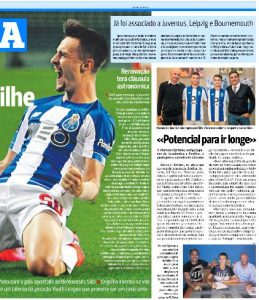 A Bola claims that what Bournemouth offered was ‘not even close’ to what could convince Porto to let the youngster go, so their attempt isn’t even taken very seriously by the newspaper.

Vieira’s current deal with Porto runs until 2022, and the club want to extend it up to 2024. His release clause, which is currently of €30m, is expected to have a significant raise.