Bournemouth and Southampton are both interested in Le Havre striker Tino Kadewere but have not made an official approach for the player.

Kadewere has been in red hot form for the French side this season, with 17 goals in 19 games putting him top of the Ligue 2 goalscoring charts.

His form has earned him attention around Europe, particularly in England, with Bournemouth, Southampton and Crystal Palace all named as suitors earlier this week.

L’Equipe confirm that is the case today, at least for Bournemouth and Southampton, reporting that both clubs have been ‘brought in by an intermediary’ for the player.

The striker is ‘expected’ to be one of the ‘winter’s biggest sellers in France’, and the club reportedly received ‘firm offers since yesterday’.

They did not come from either Bournemouth or Southampton, but they may have to move quickly if they are genuinely interested in the 24-year-old. 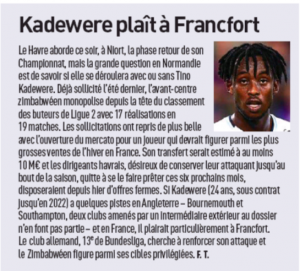 There is also interest in him from France and Germany, particularly Eintracht Frankfurt, with Le Havre’s minimum asking price set at €10m unlikely to prove much of a roadblock to his list of suitors.