Home Championship Boost for Watford as target ‘on his way out’ of club this...
SHARE

The week started with a rumour saying Watford are interested in the signing of Jovane Cabral from Sporting.

The story was first published in the English media, and obviously covered by the Portuguese press, even though they didn’t have a lot to add to it.

Without confirming the interest, all the local outlets could do was get the information that the Lions would demand at least €15m for the move.

Well, even though the local sports newspapers have been quiet about this rumour today, outlet Correio da Manhã seems very confident that the transfer could happen. 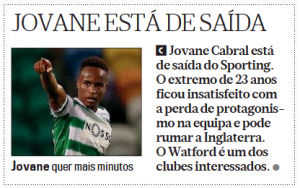 They feature a short story claiming Jovane ‘is on his way out’, claiming he’s been unsatisfied with the ‘lost of protagonism’ at Sporting.

The newspaper then says he ‘could’ head to England, where Watford ‘are one of the interested clubs’.

Jovane’s price isn’t mentioned this time, but the winger, who had eight goals and five assists this season, is valued by Transfermarkt at €8m.

However, he’s protected by Sporting with a release clause of €60m.