As seems to often happen with Wolverhampton Wanderers, a huge story will break for about 24 hours, and all will then go quiet.

We had something last January with André Silva, which then became a bigger story in July, and now it’s been Amadou Diawara’s turn.

The Napoli defensive midfielder, who hasn’t managed to find a space in Carlo Ancelotti’s plans as of yet, has been linked with move to Molineux in the upcoming transfer window, although it would have to be an expensive one.

Claims in Italy made it clear the Serie A side wouldn’t allow anything to happen below €50m, while a couple of reports of €35m+ offers emerged one the same day. 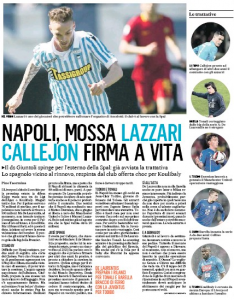 Now, Il Mattino, without mentioning anyone in particular, make it clear Diawara isn’t going anywhere in January except under one condition: if he is included in some kind of exchange deal.

Apart from Ruben Neves, who would simply end up in the Guinean’s shoes at San Paolo, we can’t really see who Napoli would want from Nuno Espirito Santo’s side

This would make more sense for Tottenham, who have also been linked with the 21-year-old, but their interest dates back to last summer, while Wolves’ is more recent, making contacts ‘to know more about his situation’.