Earlier on Friday, we covered an article pushing Tottenham as a potential landing spot for Paulo Dybala should he fail to extend his contract at Juventus.

The Argentine’s deal expires in June 2022, and with some stalling in the whole putting pen to paper part, there are questions being asked.

Tuttosport have similar information on Friday, covering many of the same point as the aforementioned article by Corriere della Sera, mentioning Inter, Barcelona and Tottenham.

The first of those teams is the trickiest ones, because they play in the same league and have a self-imposed salary limit, which Dybala’s demands would exceed.

An exception could be made, of course, for a player of his magnitude, but it’s made clear ‘it is very unlikely’ that he would go to the Milan based side, because ‘moving to the Nerazzurri would also mean betraying the feeling with the Juventus supporters’. 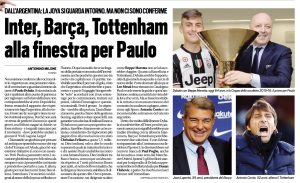 This is a bit of a boost for Barcelona and Tottenham, both seen as teams where the Argentine ‘would have the opportunity to play in teams looking for new stars’.

For the London side, they state that if his situation with Juventus reaches a point of no return, then ‘beware of Spurs’, because ‘Antonio Conte is an indisputable admirer’ of the player.

Therefore, both Barcelona and Tottenham ‘could be two solutions’, where he would likely be welcomed with open arms, and where wages, at least in the Premier League, wouldn’t really be an issue.

This is all backed up by Xavier Jacobelli, an Italian journalist who spoke to Radio Radio, relayed by Calciomercato.it.

He said: “Inter are at the window, as well as Tottenham. Conte and Barcelona also highly esteem Dybala. We have to see what he will do in these months, because Beppe Marotta (Inter’s CEO) and other companies are at the window and are watching”.