Barcelona’s Frenkie de Jong has been a target for Manchester United since April, just a day after the Premier League side announced Erik ten Hag will be their new manager this season.

Last month, the Red Devils chiefs made a trip to Spain to hold talks with the La Liga side’s leaders to unlock the deal for the midfielder. There has been no progress made because of the deferred wages owed to him by the Catalan club.

Xavi Hernández has fielded the 25-year-old in the heart of his defence in a few friendlies during pre-season, while he continues to be linked with Manchester United.

If the Netherlands international refuses to leave Barca this summer, he could risk losing his spot at the Camp Nou and in return, prominence in Louis van Gaal’s side for the Qatar World Cup.

Former Rangers goalkeeper, Ronald Waterreus has urged De Jong not to risk his place in the national team.

“I can no longer hear the slogan ‘Més Que Un Club’ [more than a club]. Barcelona are a commercial monstrosity, in my eyes it symbolises everything that makes modern football so ugly,” Waterreus told Algemeen Dagblad.

“The way in which they are now blackmailing Frenkie is a striking example of this. I hope he keeps his footing and stays unless they harass him more and he smashes his own windows for the World Cup. Then he better go to United, where he’s wanted anyway.” 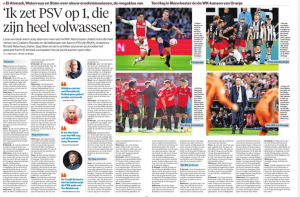 The 51-year-old Dutchman is of the belief Ten Hag could help Manchester United bring the glory days back at Old Trafford.

“If there is one Dutch trainer who can turn United into a club that matters again, it is Erik ten Hag. What he has achieved at Ajax is bordering on the impossible,” he explained.