Nabil Bentaleb has played in enough matches between Tottenham and Arsenal to get a feel for the North London Derby, and it’s left a mark on the player. Bentaleb enjoyed the occasion of the games, and the added rivalry against Arsenal helped his natural Tottenham game.

However, whilst Tottenham versus Arsenal may be good, Bentaleb has told German magazine SportBild that the emotion of Schalke against Borussia Dortmund is something which came to him more quickly.

Bentaleb joined Schalke on loan at the beginning of the season after Mauricio Pochettino decided he wasn’t a big part of the club’s future plans. Pochettino already had a wealth of options in midfield and the signings of Victor Wanyama and Moussa Sissoko gave him even more. Schalke negotiated a buying option with Tottenham, and the midfielder will continue beyond the end of his loan.

The 22 year old told SportBild: “I’ve seen some derbies in London as a Tottenham player in England. The emotions didn’t come as quickly as with Dortmund against Schalke. In 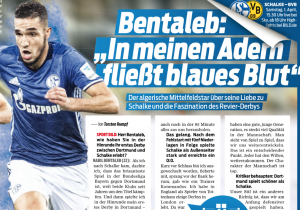 this game I noticed: Blue blood flows in my veins.”

Bentaleb has repeatedly said fan pleasing things which talk up Schalke and their support, and by extension seem negative about Tottenham, but the German club is such an emotional basket case at times that he’s probably best advised to continue with the soundbites.

The ‘blue blood flows in my veins’ comment is likely to be a firm favourite among Schalke fans.