Home Championship Benitez quizzed by Marca on leaving Newcastle this summer, and what would...
SHARE

Rafael Benitez is very much the man of the moment for Newcastle United, on a positive note at least. The Spanish manager stayed with Newcastle despite relegation to the Championship, and led them back to the big time at the first attempt.

Newcastle’s promotion to the Premier League has of course made the news in Spain, and brought further praise for Benitez. The drop to Newcastle from Real Madrid was seen as huge in the Spanish media, so to then go down to the Championship was a further blow to the manager’s status.

Now he’s impressed and achieved his goal, Marca want to know if he’s eyeing the Newcastle United exit. The Spanish newspaper asked Benitez if he’s considering leaving St James’ Park and, if so, what kind of offer would seduce him. 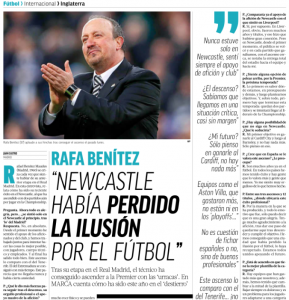 Benitez wasn’t having any of it, but didn’t guarantee he’s staying either: “My first goal is to beat Cardiff City and then Barnsley, and there’s nothing else.”

Newcastle United beat Preston North End 4-1 on Monday to secure promotion from the Championship. Ayoze Perez scored twice for Benitez’s side, with Matt Ritchie and Christian Atsu also finding the back of the net.