‘Luis Filipe Vieira negotiating in England’. We’ve seen this headline quite a few times this year, and it always has some mystery surrounding it.

The Benfica president often flies to the UK to take care of business, and the Portuguese press don’t always find out what he’s doing there.

This time, Portuguese newspaper Record even reports that he’s negotiating the sale João Carvalho, a youngster who has only one official appearance for Benfica’s first team.

But the destination is still unknown, as despite some old links, Record has no additional information on who could be getting the youngster.

That’s why we’re guessing Wolverhampton Wanderers a reasonable possibility here, and we’ll tell you why. 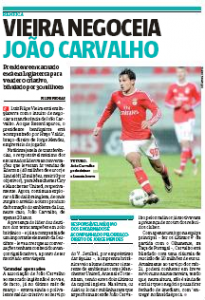 The first thing is: it’s no secret that Jorge Mendes has been helping Wolves with transfers, and as reported by the newspaper, one of his main men travelled with Vieira to take part in the negotiations.

The 20-year-old player is represented by Gestifute, and Hugo Valdir, who Record calls ‘Jorge Mendes’ right arm’ is travelling with the Benfica president.

Now the Championship side worked quietly during the summer window, and that’s how they signed five Portuguese players, plus Willy Boly, who arrived from Porto. There’s also the manager Nuno Espírito Santo, and we don’t need to say who his agent is.

In his only appearance for Benfica, João Carvalho played nine minutes, which makes quite unlikely that he could prove himself to whoever watched him.

But with Mendes pulling strings at Wolves, it would be no surprise that he could convince the club to go for him, especially after the good experiences the club had with the representative this summer.

Carvalho even had the chance to face an English team this year, as he had a few minutes against Hull City in the Algarve Cup during preseason.

But there’s a very important detail in the story: Record claims that Vieira is in England to sell, not to loan the player out.

So if it’s really Wolves who are after him, or if Gestifute can persuade Wolves they are, fans should start expecting some early January spending to guarantee promotion soon.

The midfielder currently has a €30m release clause, which is obviously too much for him, but it also means he shouldn’t leave for less than a few million.