Yesterday we brought you reports from Portugal and Spain regarding midfielder Samuel Costa, and Wolverhampton Wanderers desire to sign him.

It was a little complicated, with one report stating that Wolves were buying him from Braga and the other stating it was Almería, who have had him on loan and have a purchase option.

Unsurprisingly it was all being managed by Gestifute, who have strong connections at Wolves.

The conflicting reports made everything a little hard to understand, so Record have come in today to try and clear things up.

They explain that, after a successful loan spell with Almería last season, Samuel Costa is set to make Braga ‘a good deal of money’ this summer.

The Spanish side has exercised an option to buy the midfielder on a permanent basis, paying €5.25m for 50% of his economic rights. The rest will stay with Braga. So, in other words, they’ll both own 50% of his rights.

That has already been confirmed by Braga, who also detailed how Almería can pay another €6m for 40% more of Costa and leave them with 10%.

So Costa will be playing for Almería, but Braga will still own 50% of his rights. The thing is, though, the Spanish side are already thinking of selling him on. 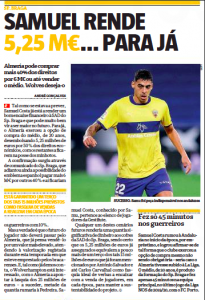 That’s because Wolves are interested, and there’s a belief that they will pay the €25m that Almería are looking for. Should that happen, 50% of it would be making it’s way back to Braga.

Either way, both sides would be making a profit this summer, especially Braga, who have already pocketed €6m and could get themselves another €12.5m by doing absolutely nothing.

Of course, it’s all dependant on Wolves paying the €25m, and there’s no indication they are going to do that just yet.