Over the past week, the idea that Lazio could make a move for Wolverhampton Wanderers’ Leander Dendoncker has grown.

They’re after a new centre-back, where the Belgian can play, and while Gazzetta dello Sport suggested Willy Boly could also be a target, Corriere dello Sport are pushing the idea it’s all about the former Anderlecht captain.

They had a big article a couple of days ago on the matter, and they have a follow up on Wednesday, looking at the player’s past and what made him into the footballer he is today.

Bought for €18m, it’s made rather clear ‘it will take €25-30m’ to convince Wolverhampton to let Dendoncker go, although the Covid-19 pandemic ‘should bring discounts’.

Jorge Mendes is also briefly mentioned, saying Dendoncker is ‘assisted’ by him, although he isn’t a Gestifute client. 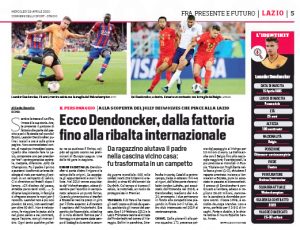 This wouldn’t be the first time a deal between the two clubs was made, as you’ll remember the double transfer of Pedro Neto and Bruno Jordão back in 2018.

Dendoncker is seen as ‘perfect’ for Simone Inzaghi’s 3-5-2, but they are also well aware he is the ‘key’ to Nuno Espírito Santo’s plans in England.

A lot of positives, and one big hurdle to overcome.