Chelsea’s search for a new goalkeeper took them to France as Rennes’ Édouard Mendy has been identified as one of the targets doe Frank Lampard’s side.

Reports this week suggested the Blues are planning to table an improved offer of around €20m, after seeing their initial bid of €16m rejected by the Ligue 1 side.

L’Equipe reported on Tuesday that Rennes have not received any bids for the 28-year-old, who is ‘hoping to join’ Chelsea.

It was also explained the French club have no intention of selling the Senegal international without having a replacement ready.

Wednesday’s edition of L’Equipe states Mendy could leave the club, ‘probably to Chelsea’. Therefore, Rennes ‘think’ of Alphonse Areola as his potential replacement.

The France international returned to Paris Saint-Germain after his loan spell at Real Madrid. He would like to move to the Premier League, preferably a club in London, where he brought a house recently.

Areola also needs to think of his place in the national team for next summer’s European championship. Lille’s Mike Maignan is ahead of him today because he struggled for regular opportunities at Real Madrid last season.

A move to Rennes will not only help him get regular playing time, but also feature in the Champions League during the 2020/21 season.

It’s claimed contacts between the two parties (most likely between Rennes and Areola) have already started.

A loan move could be an option and PSG wouldn’t have a negative view towards the temporary switch. 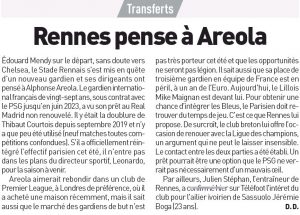 Areola’s chances of arriving at Rennes will depend on Mendy leaving them, most probably to Chelsea.

The entire report could be based on the presumption that Chelsea will table an offer for Mendy, which is why Rennes are in the market for a replacement.