Unless you’ve woken up from a deep slumber and missed the past few months, you’ll be fully aware that Chelsea, despite wanting to get Romelu Lukaku from Everton, were unable to sign the Belgium international, ending up with Alvaro Morata instead.

This, however, wasn’t for a lack of trying, but Manchester United managed to convince the former Blues’ starlet that teaming up with José Mourinho was the better move for him, helped along the way by Paul Pogba.

However, according to Sport/Foot in Belgium, one of the reasons behind the failed bid could be Everton’s demands, who allegedly asked Chelsea for two players plus a whole lot of money for their star striker. 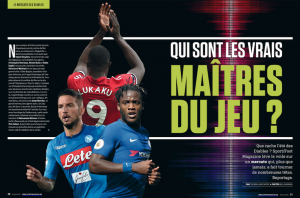 The magazine, looking at some of the bigger deals involving Belgian players this summer, reveal that when Antonio Conte and co. came knocking for the 23-year-old, Everton agreed to let him go if they could get Michy Batshuayi, Bertrand Traoré and €50m in return.

Ronald Koeman and Co. clearly had their eye on a good deal.

As you can imagine, that didn’t go down too well over at Stamford Bridge, who politely declined the demands, as they wanted to hold on to the former Marseille forward, having rejected offers for him all summer.

We doubt this was the only interchange between the two sides prior to Lukaku’s move to Manchester United, but if it was a starting point, it certainly never looked good for Chelsea.