Time after time there are reports in the Spanish regional media about the Southampton player returning home and helping out with various projects.

Award ceremonies for children, recognition of amateur sportspeople, helping out with initiatives to help those either less fortunate than himself or with dreams to follow him, for years he’s been a regular feature.

The midfielder also speaks well about the game and his experiences in it.

This week Marca grabbed him for an interview and whilst their real, if slightly ulterior, motive was probably to get quotes about Sadio Mane and a potential Real Madrid move, there was also a good chat about Southampton.

They then go on to explain how things are a little brighter now.

Romeu had a tough time during Mark Hughes last days at at the Saints, and has explained how whilst it was difficult, it gave him a motivation to show his level when he returned: “It was a complicated phase because I didn’t have the confidence of the coach. The weeks passed and, as you do not play, you find yourself getting worse physically and you have certain doubts. You return and you have the feeling that you have to demonstrate many things.”

The arrival of Ralph Hasenhüttl changed everything.

On the Austrian’s style of play and approach to the game, the 27 year old Spaniard said: “I like it. It’s bold and offensive. We play without fear for anyone.”

The relegation battle is far from from over, and Marca asked about the intense period ahead: “The feelings are relatively good. It’s not a comfortable situation, but we have a 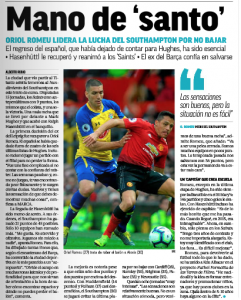 good run. It’s going to be a close fight. We are many teams within a few points. Last season we were saved with 36 points, but this time the stay will cost more.”

And here’s the best bit for Southampton fans… Oriol Romeu sounds like he couldn’t be happier where he is and can’t hide his happiness at being given the chance to captain the team: “It’s the most beautiful thing that ever happened to me. When I arrived, in 2015, it was unimaginable. I have three years of contract and I would not mind extending it. I’m very identified with the club, the fans… It’s difficult to improve.”

Of course, Romeu couldn’t speak about himself without talking about his new Futur Formatiu project in Terres de l’Ebre: “I was born there and the idea is to train coaches and promote children, as there are few clubs in the area. Hopefully within 5-10 years there will be some in the elite.”

Let’s hope they learn life lessons as well as footballing ones from Oriol.