Despite Barcelona justifiably pleading poverty this week, and explaining there’s going to be no huge signings in the near future, AS believe there’s something quite big at work behind the scenes.

According to the newspaper, the Blaugrana believe they’ll be able to make ‘at least one great signing’ for the 2022/23 season, and in the process they could beat Real Madrid to their major goal.

AS say Barcelona have made it known they have the wiggle room to bring a star in next summer, and they’ve also leaked that Mbappe is an objective.

With the Frenchman’s PSG contract expiring at the end of the current season, Barcelona would hand Pini Zahavi the mandate to build a deal for them. It was Zahavi who took Neymar the other way, so this would be quite a turn of events. 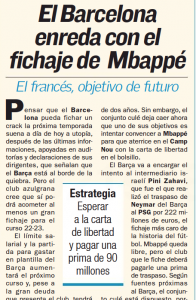 According to the claims, Barcelona are ‘willing’, ‘because they believe their accounts will allow it next July’, to pay a signing bonus of €90m.

So Mbappe would arrive for free, but receive €90m before wages are even taken into account. It’s stated Barcelona think Real Madrid are only willing to pay a €50m bonus.

Quite why Barca would feel the need to jump from €50m to €90m, rather than, say, offer €70m, isn’t clear, but this is perhaps a situation to keep an eye on.