Home Europe Barcelona ‘want him for January’ – Club working on signing for when...
SHARE

Dani Olmo has been linked with a return to Barcelona since not long after he left the club for Dinamo Zagreb in 2015.

The Spaniard thought his career would be best served by a very early, and quite unusual, move to Croatia. Given he’s already an experienced Spain international at just 23-years-of-age, it’s hard to argue that he was wrong.

Olmo moved to RB Leipzig in 2020, and has continued his progression in the Bundesliga.

Towards the end of the summer window, there were claims of an imminent Barcelona effort, and when the market was closed it was reported that effort had come as the deadline was fast approaching.

An agreement couldn’t be reached, with Barcelona’s difficult finances playing a part in that. The interest is still there and now eyes turn to coming windows.

Mundo Deportivo report the Camp Nou club ‘want him for January’, making it clear Ronald Koeman’s side would like to take the player back sooner rather than later. 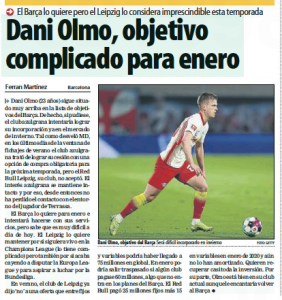 However, it’s thought Leipzig would be looking for €60m in January, which is currently beyond what Barcelona can pay.

Recent claims from Germany of Manchester United and Manchester City being likelier destinations don’t really seem to have a lot behind them.