Alex Grimaldo is still only 23 years of age, despite it feeling like he’s been around the rumour mill for much of the past decade.

Moving from Barcelona to Benfica in 2015, the fullback had to contend with injuries which slowed his progress. That’s all behind him now and he has 37 appearances so far this season, with his performances attracting plenty of transfer interest.

Mundo Deportivo report that the clubs who pop up most often are Arsenal, Manchester City, Atletico Madrid and Juventus. That’s an impressive list.

Barcelona still rate the player but are aware he absolutely wants to be first choice wherever he goes, and with Jordi Alba recently renewing until 2024, that wouldn’t be the case if he returned to his previous club.

But there’s still an interest in what happens next. 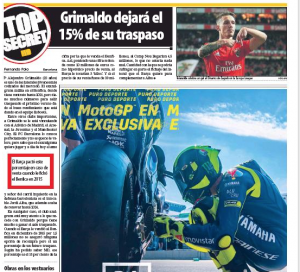 In a ‘Top Secret’ section, Mundo Deportivo claims Barcelona secured themselves 15% of a future transfer when selling the player for €1.5m in 2015.

So if Arsenal, Manchester City, or any of the others, pay €20m, that brings Barcelona €3m… not to be laughed at given how narrowly Barca run their finances.

The Catalan newspaper says Grimaldo is ‘one of the most sought after’ young footballers around.