Luis Suarez has only scored on three occasions in all competitions for Barcelona this season and two of those goals came in his side’s 8-2 victory over Huesca.

The front page of today’s edition of Sport claims the Blaugrana technical secretary Eric Abidal is focused on strengthening the No.9 position and the club are looking to bring in a young and proven player who can ‘complement’ the striker as they have no plans to offload the Uruguayan, despite his poor form.

It’s claimed the Spanish champions want to bring in European players and therefore, Genoa’s Krzysztof Piatek and Nicolas Pepe of Lille are mentioned as targets.

The Poland international has scored 13 goals in all competitions this season and his form has seen him attract interest, including from the Catalan club. He plays up front and his abilities and qualities are more similar to that of the former Liverpool man.

Sport mentions that Genoa are a selling club and they could part ways with their star for a fee of €50m-€60m.

On the other hand, the Ivory Coast international has bagged six goals and registered four assists in the league and has been deployed on the right side of the attack. 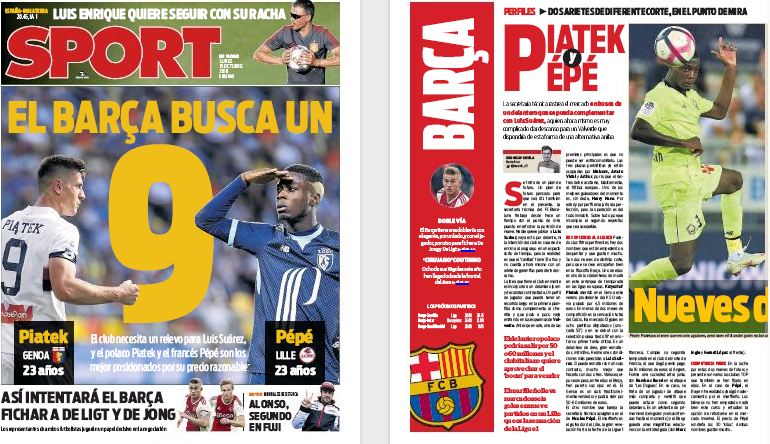 The report mentions Pepe as the ‘most complete attacker’ and his versatility of playing as a second striker suits the profile of the player that Barcelona are looking at.

The club shares a good relationship with Lille chairman Gérard López and chief executive Marc Ingla, and the forward could be available for €30m.

Abidal has identified the Ligue 1 player and Piatek as targets for the future and the duo are liked ‘a lot’, but they are also aware that any approach from Barcelona will see them face competition from top clubs across Europe.