Robin Gosens put in one of the best performances of Euro 2020 so far, as he scored a goal and added an assist as Germany beat Portugal 4-2.

The Atalanta player was simply too hot for the Portuguese to handle, and he brought his name to a much wider audience than those who already know of his exploits in Serie A.

This inevitably saw transfer rumours develop, with Barcelona dragged into the picture. Leicester City have been the club most linked with Gosens in recent months, with repeat claims Brendan Rodgers’ side have been close to a deal for the attacking fullback.

Barcelona links haven’t been so strong, yet the Catalan media can’t ignore that their German counterparts have been trying to hype the situation since the game.

Tuesday’s edition of Sport reports Barcelona have made contact over the ‘fashionable’ signing. The Catalan newspaper say, 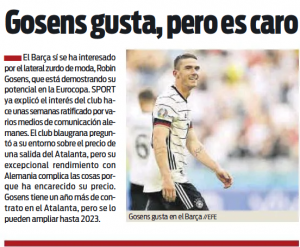 according to their own information, the club contacted people close to Gosens, likely his agents, to try and find out the cost of a deal.

The insinuation is that the transfer fee would be too expensive right now for Barcelona to consider a serious swoop, given it’s not an area of the pitch they’re desperate to improve.

Over to Leicester City, then.