Ronald Koeman identified Eric García and Memphis Depay as his two key targets in the last window, but Barcelona failed to sign the Manchester City defender and the Lyon forward.

The Catalan club made multiple offers to sign the centre-back, but the Citizens kept turning down the proposals made by the Camp Nou side.

Pep Guardiola’s side demanded €20m for the Spain international, but Barca’s last offer for García was worth around €18m.

After having struggled to sign the City defender, the Blaugrana had shifted their focus on Lazio’s Luiz Felipe. This is according to a ‘Top Secret’ report from Mundo Deportivo.

It’s claimed the La Liga side ‘contemplated’ signing the Brazilian ‘in the last days’ of the summer window and they even contacted Felipe’s representatives.

Mundo adds ‘it was a consultation’ because the two parties have explained there was ‘no formal offer’. 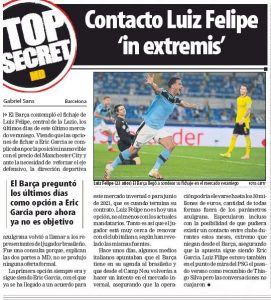 A few days ago, Italian reports suggested the Spanish club have the South American on their agenda for January and his asking price could rise to €30m.

These figures are not affordable for Koeman’s side and claims of contacts between the two clubs for Felipe has also been dismissed.

He also happens to be close to signing a new contract with Lazio.

According to the newspaper, Barca continue to bet on García, who is in his final year of his deal at City.