Barcelona are looking for an emergency signing outside the transfer window following injury setbacks to Luis Suárez and Ousmane Dembélé.

Real Sociedad’s Willian José was considered one of the options, but Sport reported on Wednesday the La Liga winners have discarded the Brazilian after La Real demanded an ‘irresistible’ offer.

Today’s edition of Sport claims the Catalan club are looking for ‘affordable options’ and therefore, Getafe’s Ángel Rodríguez and Alavés’ Lucas Pérez are the best placed candidates for the ‘price-quality ratio’.

Ángel has a €10m release clause, but the Camp Nou side remain confident a deal can be agreed for a lower fee. Perez’s asking price is set at €20m, but the report adds there’s belief it can be lowered to €15m.

Barça’s idea is to hold immediate talks with Getafe and Alavés, to find an agreement, rather than taking the drastic step of paying a buyout clause.

The official position from both players and their representatives is to deny any contacts in order to not upset their respective clubs or cause any problems for the potential operation. 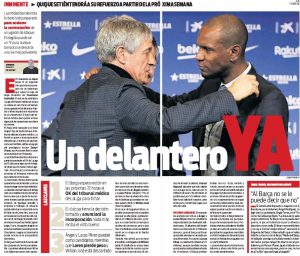 Sport further adds: ‘Anyway, Barca has prepared a third way, which would go through the incorporation of a versatile offensive footballer.’

It remains to be seen which player Barcelona will end up signing outside the transfer window.