Barcelona may be ninth in La Liga and 11 points behind leaders Real Sociedad, and ten points behind Real Madrid, but there’s now some optimism at the club.

Xavi Hernandez arriving as the new manager has brought a smile to many, and there’s a group of young players coming through who could prove to be solutions for both the short and long term at the Camp Nou.

That will help Barcelona rebuild their La Masia identity, based on the future success of the likes of Ansu Fati and Gavi. Another one to have come through the system is Nico Gonzalez, and Barcelona have managed to keep him from the clutches of Manchester City and Real Madrid.

Friday’s edition of Mundo Deportivo has an interview with the 19-year-old midfielder, who made the breakthrough to the senior team under Ronald Koeman this season.

Mundo put the following to him: ‘You gave up great offers in your career such as Manchester City, where your father worked, or Madrid as a child, because you always wanted to play for Barça. Where does that culé feeling come from, given you’re Galician born?’ 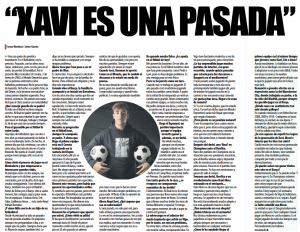 Nico Gonzalez replied: “When I started watching football, it was in 2008, 2009 and 2010. Anyone became a follower of Barça, really, at that time. And I have always said that the best offer is that of Barça, to stay here and give it a try. And it has turned out very well for me.”

Should the youngster continue to get regular games for Barcelona then there’s little argument with his decision making, and he could be one that got away for Manchester City.