Neymar’s contract expires in 2022 and despite stating “everything is almost settled” regarding his renewal, he is yet to commit his long-term future to Paris Saint-Germain.

A delay from the Ligue 1 side to tie down the Brazil international to a new contract will only lead to more rumours, while this also gives hope to Barcelona in bringing the forward back to the Camp Nou.

That’s according to AS, who point out PSG’s ‘sporting prestige was touched’ following their elimination from the Europe’s elite club competition.

The 29-year-old is known to be a ‘controversial character on and off the pitch’ and despite this, Barcelona president Joan Laporta believes his signing would have a ‘triple positive effect’.

His arrival would increase the La Liga side’s brand value. The second effect would be with regards to the sporting side as they believe his signing would ‘raise the bar’ of the squad to which Ronald Koeman has ‘restored value and vigor.’

And the third and last positive effect of the former Santos star’s potential signing would be on Messi. His return would ‘give an unbeatable wink’ to the Argentine, whose current deal expires on June 30th.

La Vanguardia earlier explained the Blaugrana can raise between €60 and €100m through player sales and this is once again highlighted in AS’s report.

The newspaper further adds Barcelona have already taken steps to sign Neymar. Days before Laporta was elected as president, he held talks with Neymar’s father and also his agent, Pini Zahavi.

AS further adds the player is ‘not as desperate as in 2019’ to return to his old club. However, his desire to reunite with Messi has opened the door to joining Barcelona again.

Mauricio Pochettino’s side, for their part, will not make Neymar’s exit in the summer easy and more so, if Kylian Mbappé, who also has a contract expiring in 2022, ends up leaving PSG.

There’s one more factor that needs to be considered here for the possibility of Neymar returning to Barcelona.

AS state: ‘The social impact of Neymar’s return remains to be resolved. For a percentage of Barca fans, the team lost their smile and football without him. For another percentage, his unannounced departure was unforgivable. Also prosecute the club. The Brazilian is 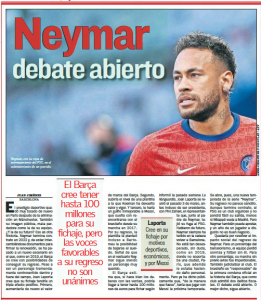 “responsible” for the first official conviction in the history of Barca, which as a club admitted to two tax crimes. The debate is open. Or rather, stays open.’

Laporta believes Neymar’s return will improve Barcelona’s sporting and economic situation, and also have an impact in the club’s efforts to retain Messi.