This week, Mundo Deportivo have already published one ‘Top Secret’ report on Barcelona and Neymar, and Wednesday sees them come with a second.

The Brazilian has a PSG contract with expires in June 2022, and he’s been expected to quickly sign a renewal. However, there’s also been some dissenting voices recently, suggesting all isn’t well for Neymar at PSG.

Mundo carry that on, explaining Neymar’s late red card against Lille at the weekend has irritated some within the French club, who feel that the player can be childish sometimes.

From Barcelona’s perspective, that gives a reason to raise an eyebrow. It’s once again stated the only way Neymar returns to the Camp Nou is as a free agent in 2022, no other way has been conceivable and he’s been informed.

Mundo say PSG could look to replace the South American with Ousmane Dembele, with there being a brief suggestion there could be a ‘barter’ in the works, given both players have contracts 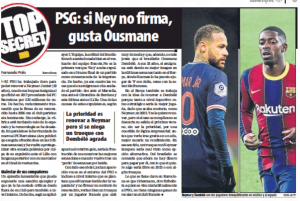 Renewing Dembele could therefore also be ‘strategic’, and a way to raise funds, given Neymar would want big wages and a signing-on fee.

Barcelona’s ultimate deal would obviously be getting Neymar for free and, having renewed Dembele, getting PSG to pay a fee for the Frenchman… which sounds very optimistic.

This one is starting to build in the Catalan media.