Prior to Paris Saint-Germain’s defeat to Manchester City on Wednesday, Neymar told RMC Sport “everything is almost settled” regarding his renewal. The forward, whose contract expires in 2022, also admitted he’s happy in Paris.

‘Neymar rushes his options to play at Barca,’ reads a headline in today’s edition of Mundo Deporitvo.

Within the report, it’s explained the Brazil international continues to push for his return to the Camp Nou, even though he publicly expressed his willingness to continue with the Ligue 1 side.

That’s because the former Santos star has an ‘obsession’ to play alongside Lionel Messi again. Barcelona are aware of this and they value his qualities, both on and off [marketing and media pull] the field.

In the background, the player keeps the option to join Barcelona alive and PSG president Nasser Al-Khelaifi is aware of it. Therefore, the latter is putting pressure, both in private and in public, on Neymar, to sign an extension.

PSG fear there will be option for Neymar to leave the club, until he puts pen on paper over a new contract.

In their efforts to retain their star player, the French club are willing to play hard for Messi, who has a contract expiring on June 30th.

TNT Sports reported PSG are preparing an offer of two-year contract with an option of further extending it by a year, to sign the Argentine. Mundo relay these claims and suggest it’s not surprising to see this report, which in a way is a tactic deployed by PSG to retain Neymar.

Ronald Koeman’s side are working in silence to extend Messi’s contract. El Chiringuito also report the Argentine is not happy with the PSG rumours and his desire is to continue with the Blaugrana.

This makes it difficult for PSG to sign Messi, while Neymar continues to push for a return to Barcelona. Mundo further explain the heavyweights within Barca’s dressing room would like the arrival of PSG player. 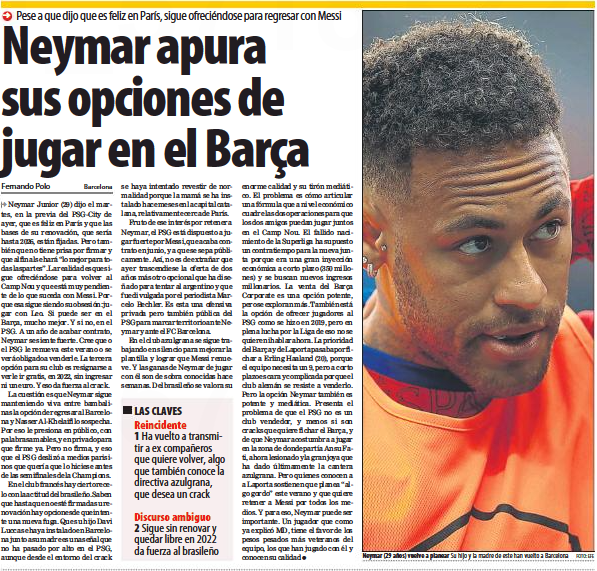 The newspaper then states: ‘The problem is how to articulate a formula that economically balances the two operations so that the two friends can play together at the Camp Nou. The failed birth of the Super League has been a setback for the new board because it was a great economic injection in the short term (350 million) and new millionaire income is being sought.

‘The sale of Barça Corporate is a powerful option, but it is being explored more. There is also the option of offering players to PSG as was done in 2019.’

To sum it up, Neymar has a desire to reunite with Messi, which is why he wants to join Barca. Koeman’s side have financial restrictions and that makes any potential deal difficult in the summer. PSG, meanwhile, are working to extend Neymar’s contract beyond 2022.

It’ll be interesting to see what will come out of this whole saga in the coming weeks and months, especially since Mundo state Neymar is maintaining different stances in private and public over his future.