Barcelona will travel to Turin as they take on Juventus in the Champions League group stage clash on Wednesday.

The two European giants will not only battle it out in the European competition tomorrow, but also for signing the same player in January

Mundo Deportivo journalist Miguel Rico explains the Catalan club and the Old Lady have a ‘same goal’ in the winter market and that is to sign Ajax’s Ryan Gravenberch.

Barca technical leaders and Ronald Koeman are impressed with the 18-year-old’s ‘projection’ and if it only depended on them, they ‘would sign Ryan Gravenberch tomorrow’.

The newspaper states the Camp Nou club are of the belief the midfielder’s physical conditions and technique could see him become the third player from Ajax, after Frenkie de Jong and Sergiño Dest, to join Barca in the last two years.

Gravenberch is valued around €20-25m and his playing style has seen him being dubbed as the ‘new Pogba’. 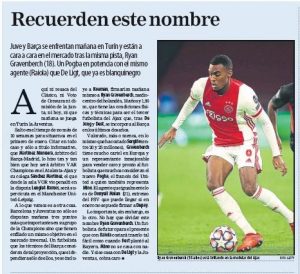 The Netherlands U19 international is represented by Mino Raiola, who also manages Donyell Malen.

The PSV Eindhoven forward is identified as Plan B for Barca, if they fail to sign Memphis Depay in January.

Rico adds signing Gravenberch won’t be as easy as signing Dest because with Raiola, ‘it will be difficult’ for Barca to land the Ajax youngster in January.