On Saturday morning we covered claims from the Catalan media regarding Barcelona interest in Jose Luis Gaya. The reports had been prompted by a reported Inter Milan interest in Jordi Alba.

Given it’s unlikely Alba will leave Barcelona unless he’s dragged kicking and screaming out of the Camp Nou, the whole thing feels like it’s built on sand. Despite that, Gaya is splashed across the front page of Sunday’s Mundo Deportivo.

Barcelona’s longstanding interest is explained, as is the Alba and Inter situation, and it’s stated the Catalan club and Valencia have been talking about things. The subjects of the chats have been Alba, Carles Alena and Martin Braithwaite.

Everything is in its infancy, but the gist of the whole situation is that Barcelona like Alba and Valencia like Alena and Braithwaite, therefore any deal could be built on the basis of a ‘barter’. 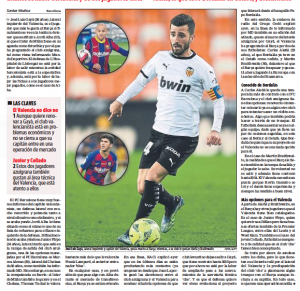 Despite all of that it would still need Alba to leave, because Gaya is considered too much of a luxury to be a reserve.

Mundo say ‘Barcelona are already moving’, preparing themselves for a possible Alba exit.