Barcelona and Real Madrid will go to ‘war’ for Valencia youngster Fabio Blanco, reports AS.

The 17-year-old’s contract expires at the end of the season and both the Catalan club and Los Blancos have already started talks to acquire his services on a free transfer.

Former Los Ches chief Mateu Alemany is part of Barca’s new sports management and he is the ‘main supporter’ of the winger’s arrival at La Masia.

At Real Madrid, they have handled good reports about the teenager for a long time and he fits well into their policy of not letting young prospects from the country escape. 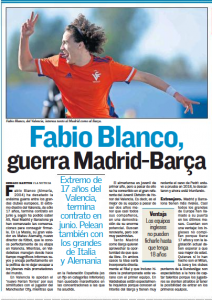 Blanco’s style of play has seen him compared to Manchester City’s Ferran Torres and he’s named the ‘new Ferran Torres’ at Valencia.

Both Barcelona and Real Madrid want to take advantage of his contract situation and their idea is to incorporate him into their academy after spending the summer’s pre-season with the first team.

Monday’s edition of Mundo Deportivo also backs the two La Liga giants’ interest in the talented youngster and then provides more information on this case.

It’s claimed the player’s future seems to be far away from Valencia and he is ‘open to studying’ the best option for him.

Mundo state Blanco has several offers on the table, including from Barcelona and Real Madrid, who have ‘already presented a formal proposal’. 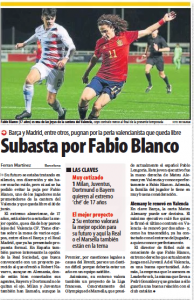 The Alemany factor can be ‘decisive’ for the Blaugrana since he offered Blanco’s last contract at Valencia.

According to Mundo, Alemany has already made contact with Blanco’s camp. He knows the young winger first hand and believes his signing is a ‘good opportunity’ for the Camp Nou side.

The wideman is inclined to leave Valencia and with Barca and Real Madrid both wanting him, it’ll be interesting to see where he will end up.