It appears we could see a mass exodus from Chelsea this summer, as Thomas Tuchel continues to stamp his mark on the Stamford Bridge side.

We’ve already seen exits reported for the likes of Fikayo Tomori, Olivier Giroud (despite the contract extension) and most recently Hakim Ziyech.

The midfielder, who spent last season on loan at Fulham, is set to return to Stamford Bridge in the coming weeks, and there will be a need to analyse what happens next.

Full of promise at a young age, the 25-year-old has never been able to fully establish himself at Chelsea, and there is a feeling he needs to move elsewhere to flourish.

That’s where Lazio come in, as Maurizio Sarri, a former manager of the player’s, is set to take over from Simone Inzaghi, who moved to Inter.

Gazzetta dello Sport are the ones reporting it, explaining that ‘attention has been growing’ in Loftus-Cheek from the Serie A side’s end ‘in the last few hours’.

That’s not much to go by, but you would think that it’s come from somewhere, and if Sarri can offer the midfielder regular game time, like he did when he was in charge of Chelsea, you would expect him to grasp it with both hands. 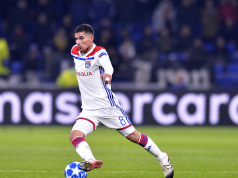