Genk star Paul Onuachu is a boyhood Arsenal fan and has never hidden his desire to join the Gunners.

Having finished the previous campaign with 35 goals and five assists in all competitions for Genk, the striker has enjoyed a good start to this season, managing 11 goals in 14 matches.

The 27-year-old’s form has caught attention of Atletico Madrid. Marca claim the player is an ‘object of desire’ for Andrea Berta, the Spanish club’s sporting director, and he has already made contact with the Jupiler Pro League side.

Onuachu is valued at €20m and the La Liga winners must decide whether to make an approach for him in January or next summer.

If they sign him in the winter market, the attacker will not occupy a non-EU squad until the end of the season, thanks to the Cotonou Agreement.

Los Rojiblancos are not the only club interested in the Genk star, as the newspaper, in another short report, names Inter Milan and the north London club as suitors. 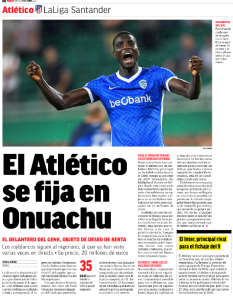 Back in May, the Nigerian publicly admitted he wants to join Mikel Arteta’s side after revealing Arsenal are his ‘dream club’.

Later in July, Onuachu’s agent also stressed it would be nice if Arsenal want to sign his client.

It may not be easy for Diego Simeone’s side or Inter to snatch him away from Genk, if Arsenal are genuinely keen to sign Onuachu.