Aston Villa and Atlético Madrid are battling it out to sign Boubacar Kamara in the summer window.

The midfielder is out of contract at Marseille on June 30th and is expected to leave them as a free agent.

Last week, Mundo Deportivo reported the La Liga side are ‘confident’ of beating Aston Villa in the chase for the 22-year-old.

Thursday’s edition of AS again names Aston Villa and Los Rojiblancos as the Frenchman’s two suitors.

Diego Simeone’s side, who tested the ground to sign the player in January, are now ‘very close’ to securing his services. However, Aston Villa ‘threaten’ the Spanish club in the transfer chase. 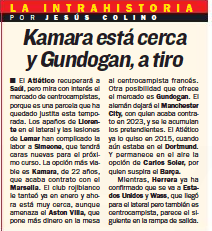 It’s claimed Steven Gerrard’s side ‘put more money on the table’ in order to beat Atlético to land the Marseille man.

AS does not mention whether Kamara favours a move to Villa Park or joining the Madrid club in the next window.

Should Aston Villa beat Atlético, then AS suggest the latter could look at Manchester City’s İlkay Gündoğan.

Thursday’s edition of L’Equipe talks about Premier League interest in Kamara, without naming any clubs.