Aston Villa have made an offer for Monaco striker Islam Slimani, but it was deemed ‘insufficient’ by the French club.

Villa have been in desperate need of offensive reinforcements, having lost summer signing Wesley for the rest of the season with a knee injury.

They have already signed forward Mbwana Samatta in a £10m deal from Genk, but it seems they also have an interest in Slimani.

According to L’Equipe, the striker, who is on loan from Leicester City, has fallen down the pecking order at the club and ‘a number of Spanish and English clubs’ have been asking about his situation.

One of those are Aston Villa, who made an official bid, but it was deemed ‘insufficient’ by Monaco, who are demanding compensation before letting the Algerian striker end his loan spell. 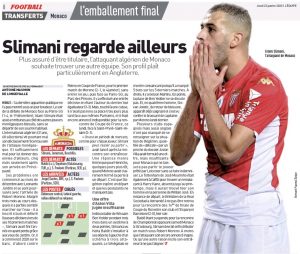 The nature of Aston Villa’s bid isn’t specified, nor is Monaco’s asking price in terms of compensation, just that Villa have tried to get him and been rebuffed.

However, with them still needing additions upfront, regardless of Samatta’s arrival, this one may be worth keeping an eye on as the transfer deadline looms large.