According to a claim in the Turkish media, Aston Villa are interested in signing Besiktas defender Domagoj Vida in the January transfer window.

Vida has been linked with a move to England over the past 18 months following his performances at last year’s World Cup.

Takvim report the Premier League side are in the market for a central defender in January, and they say the Croatian international is an option.

Its reported Villa are preparing an official offer for the 30 year old and are willing to pay €10m to Besiktas.

Dean Smith has used the likes of Ezri Konsa and Bjorn Engels alongside Tyrone Mings so far this season and signing Vida could be a good move given his experience. 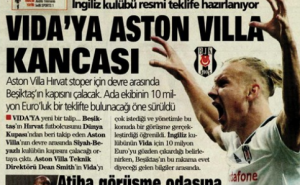 The former Dynamo Kiev player was linked with a move to Norwich City last month, and there were reports in the Turkish press that Besiktas could sell him because of their financial situation.

Given the previous links, with around half the Premier League, it may be best taking this one with a pinch of salt.

Vida’s contract at the Vodafone Park will expire at the end of June 2022.