Kodija was set to hold a meeting with the leaders of the Premier League club, and a loan exit during the winter market was thought to be possible.

The player’s former club Angers were interested in the potential chance to get him back, and whilst things weren’t advanced at that stage, it was claimed a move could accelerate quickly before the close of the window.

The move didn’t come off in the end, and Saturday’s edition of L’Equipe believes it was down to Aston Villa not being able to get a replacement in the limited time allowed.

Villa would have needed to ‘find an attacker’ to authorise the loan move to Ligue 1 and weren’t able to do so. 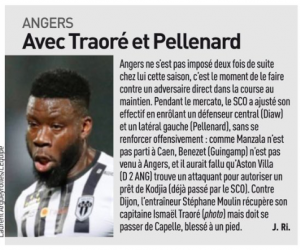 It was probably a big ask of the Midlands club. If Angers weren’t prepared to pay a fee for Kodija, and insistent upon a loan, then going out and replacing him would have likely required another loan.

Southampton’s Charlie Austin was linked, and that could have been the answer, but he’s remained at the club.