On Tuesday, Cuatro stated Arsenal are the most interested team for Real Madrid’s Marco Asensio.

The Gunners wanting the winger is reported in also today’s edition of Spanish outlet AS.

His deal expires in 2023 and the newspaper states Los Blancos have not yet offered a new contract to the 26-year-old.

The former Mallorca man is represented by Jorge Mendes and the latter is preparing the ground for the ‘real negotiations’. The super-agent, who has an offer, has accelerated efforts to find suitors for the Spain international.

Mendes wants to put proposals he will receive for Asensio on Real Madrid’s table and then assess which one is more interesting. When discussing the player’s suitors, AC Milan, Arsenal and Juventus are mentioned.

AS relay claims made in Italy about the Serie A winners wanting the player. With regards to the Gunners, they state Mikel Arteta is the ‘great supporter of the operation’ to sign his compatriot. Juventus, along with Arsenal, have emerged as contenders in recent weeks.

Online, AS provide more information on this case. They explain Asensio’s valuation is set at €40m and Carlo Ancelotti’s side would be ‘satisfied’ to earn this fee from his sale in the summer window.

At the same time, Real Madrid are aware the offers they will receive will be lower since his deal expires in 2023. 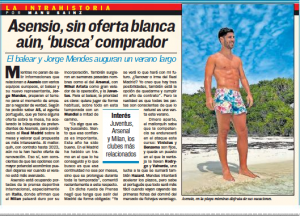 Another option for Mendes is to let the window advance, so that an eventual fight between his suitors can help Asensio land a better contract elsewhere.

With Arteta keen and Real Madrid not offering a new contract to him, it needs to be seen how the Asensio case will end up in the coming weeks and months.