Arsenal are yet to make any ‘firm offers’ for Philippe Coutinho, despite reports of their interest in him.

That’s according to Sport, who say Barcelona are very much open to loaning out the Brazilian this summer if they can.

The Catalan giants are in the midst of a financial crisis and desperately need to sell off players in the squad to reduce their wage bill to meet new caps set by La Liga.

Coutinho is among the highest earners in their squad but not a part of their plans and so finding a new club for him is a priority for those in charge at the Nou Camp.

Doing so is a ‘big challenge’, though, given the money involved and the fact Coutinho has hardly shone in Spain since his move from Liverpool.

Barcelona are looking to place him on loan and get his full wages covered, and the player is open to the move, having ‘agreed to leave’ and not put up any obstacles. 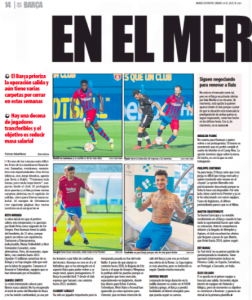 His aim is to return to the Premier League, and a ‘competitive project’ and several clubs have been linked, including Arsenal.

They would like a replacement for Martin Odegaard after he returned to Real Madrid, and Coutinho would fit the bill, but according to Sport, there are still no ‘firm offers’ at this moment in time. 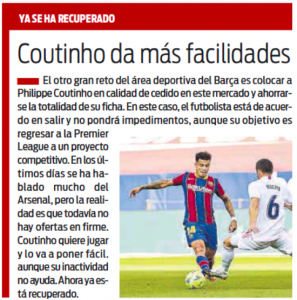 That could change in the coming weeks, and Mundo Deportivo say Barcelona know ‘it’s going to be a long one’ in terms of finding a deal.

Their plan is to use him this summer to demonstrate the midfielder is back to full fitness and ready to go, and they know he has a ‘Premier League profile’.

At this point, though, his wages are proving to be an issue, and the likes of Arsenal are yet to make a definitive move because of them.